It’s just not how we do things here in England…

Posted by Branch Media and Publicity Officer on Mar 11, 2019 in Blog | 0 comments

Who else is fed up with hearing that phrase? Who else is sick to death of that “holier than thou” attitude of some of our “top” footballing heroes and commentators? Who else is tired of hearing the same contradictory, patronising, agenda driven drivel from SkyTVisf**kings**t? Who else is hacked off with the bare faced cheek of the rank hypocrisy from these old footballing treasures? It’s just not how we do things here……? No. It’s more of a case of do as I say, not do as I do. If karma ever does come to them, they would find that eventually those who live in glass houses would be showered by an avalanche of boulders.

In fact, in the last 10 days we have been subject to some of the most terrifically bad on field decisions that some of “leading teams in Britain” fielding some of “the best footballers in the world” have duped the officials into. But of course, this is done “in the spirit of the game”, our beautiful game. Because these “professional” fouls, diving incidents in the penalty box, shirt pulling in the penalty area when taking corners and free kicks, appealing for free kicks and throw ins when it is clearly NOT the correct decision, feigning injury, blatant time wasting (game management according to the mealy mouthed pundits on SkyTVisf**kings**t) etc. is NEVER done by any player in the Premier League, because… it’s just not how we do things in this country, apparently.  It’s just these foreign managers, who don’t know the “proper” rules, who don’t understand how “we” play football in this country. After all, there are no managers in the Premier League who would ever blame a loss on the refereeing decision…. Unthinkable that the ref would ever be used as a scapegoat for a crap performance. It’s just not the done thing in this country.

Take the VAR decision against PSG. That was ball to hand everytime. The ball was never destined to go anywhere near the goal. Take the penalty decision at the Emirates on Sunday when Fred elbowed Lacazette in the back, that was a soft penalty if I have ever seen one. In fact, it was so soft, that koala bear hugging onto those toilet rolls would be positively asleep in it within seconds. As much as I hate Cardiff, they deserved to beat West ham, purely for the sole reason that Hernandez is a diving cheat. Not to mention all those appalling high challenges which littered just about every single game. Some of them potentially career ending tackles, but most brushed under the carpet under the guise of “gutsy challenges”. Not many were actually mentioned, let alone rewound and replayed on Match of The Day by Mr Squeaky Clineker (who has never put a foot wrong of course).  The only replays were the new “players view” angles, which were basically another tool to fool the viewer and only show what they want you to see. Not called the Biased Broadcasting Company for nothing!

When it comes to the Premier League, and I suppose, in some ways, the Championship, it is clear who the flavours of the month are. It is clear who they prefer to devote the majority of the airtime to. It is easy to see through the thinly disguised post match interview questioning in order to provoke a response. Hence why Bielsa has to be congratulated for treating them with the contempt that they so deserve.

At the head of it all are the grey, double breasted suited, jobs for the boys dinosaurs that are in charge of the FA and the EFL. The ones who are responsible for all that is wrong about the game, our beautiful game, in England. However long they are in charge, our football will never get any better.

There was a little light humour however.

This weekend, in a spectacular faux pas that can only ever be of the scale attributed to that of the EFL, a statement was released by them stating that they condoned the actions that occurred on the pitch in the second city derby. One can only assume this is Shaun Harvey’s parting shot or whoever wrote it was Shaun Harvey’s second in command. It was altered but only after it was captured on social media for all and sundry to see. After all, nothing is ever truly deleted on social media.

Now there is a big hoo ha about the “safety of players” after the events at Birmingham and in Scotland. This subject will be left to the next blog. Let’s just enjoy the moment we have… 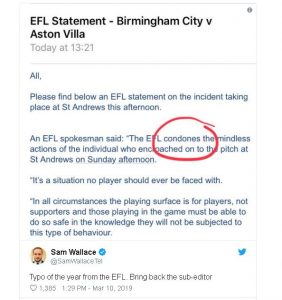 Posted by Branch Media and Publicity Officer on Mar 10, 2019 in News and Events | 0 comments

March 2019 has come way too quickly. The last 8 months have gone by in a flash and now we have arrived at the business end of the season. My prediction of being promoted by February did not prevail but no one could have predicted that we would beset by so many injuries to so many of our players. Still, here we are, 2nd in the league and our fate is all in our own hands.

Thanks to all for the good turn out last Sunday. The LUSC exec minutes were read out and reported on. The Away Ticket Charter was discussed briefly, and to quote Abba – neither you nor I’m to blame, when all is said and done. Other items discussed will be detailed in AOB.

A massive loss was made at QPR – no more needs to be said about that. We are still awaiting details re Birmingham and Preston ticket allocations and sale dates. With any luck the rest of the games will be done on the tracker. Ipswich Town plans are afoot re departure times seeing as it is an early kick off, further announcements TBC.

LUSC Annual Quiz will be taking place on Thursday April 4th in the Eddie Gray Suite at ER. Our branch has enough for 4 teams this year and Ripon will also be joining in the fun. The branch will be paying the £10 entry fee per team. Teams will need a name, so please start thinking of an appropriate name for your team and get revising!

Teams are Team 1: Deputy Yates, Ricky Greenwood, James Proctor, Callum Brook, Team 2: Karen Webb, John Webb, Sean Hunter, Dave Rowson, Team 3: The Chairman, The Secretary, The MPO and Dave Poole, Team 4: The Littlefair Bros, Smuff and a.n.other, Ripon: Morro, Jordan and Mark and Bev. Mick and Geoff hopefully will be coming along, so if anyone else fancies coming through, please let us know and we could get another Harrogate team.

Centenary Merchandise: The branch will order Centenary Membership Card wallets (one free for every member next season but options to purchase more at 50p per wallet), LUSC wristbands, canvas shopping bags, car stickers and pint / half pint glasses. If anyone can think of anything else, please feel free to get in touch, usual channels.

Annual Harrogate & District BBQ: Following the howling success of last years, we will be having one this year sometime in May. The Secretary will get in touch with the Londesborough re booking upstairs again. We would like anyone who can volunteer to help out to form a BBQ committee by next branch meeting. The branch will charge a nominal entry fee of £1 members, extra non members.

Raffle prize for two tickets in hospitality for the Millwall game are still on sale for £1. The draw will take place at the LUSC exec meeting on the Thursday 14th March. We will be selling ticket on Tuesday on the way to Reading. This will be your last chance.