Look Back in Honour

Posted by Branch Media and Publicity Officer on Feb 24, 2021 in Blog | 0 comments

Yesterday we lost Eric Ware, one of our longest serving branch members. At 74 years of youth, Eric was supporting Leeds United and travelling away, way before most of us, and continued to hold his season ticket and travel when he could, right until we were stopped by bat flu. Eric was there from the very beginnings of the branch, travelling on the old Pynes and Murgy’s buses. He was there in Paris in ’75, he racked up many, many football miles in a time when travelling by coach was realistically, the ONLY option because trains and cars, simply was not. It might seem very easy to book your seat on trainline nowadays. You can get yourself to London, see the game and get back for a couple of pints in Leeds, long before most of the late night revellers have even left home to go into town. It wasn’t so easy in the old days. Even in the 90s and early 2000s, cheap reliable train travel was hard to find, and depending on who you were travelling with, might not have been much fun.

Unlike the song, Leeds fans don’t look back in anger. Anyone who has been a long standing, long suffering Leeds fan, can only look back in honour at what has happened to us in the last three seasons of Bielsa.

At the last monthly branch meeting that we were allowed to hold, I had a chat with Eric about what he thought about Bielsa and the football we were playing.

Those of you who knew Eric, will know that he loved Leeds United, and he loved talking about Leeds United. Eric could talk the hind leg off a donkey. He remembered all the games he’d been to and had so many stories of following Leeds over the decades. Stories now lost, but those of us who heard him speak about the old days, will treasure them. That evening he was so excited about the football we were watching. The team were playing as a team, and he said it was like watching them in the old days, how football should be played.

And Eric is not the only one who has said this. Most, if not all the pundits on SkyTVis f**kings**t, have come out with this comment. Begrudgingly to start off with, but the likes of Souness, Merson, Carragher, Neville, Hinchcliffe et al are all reading from the same page nowadays. I can’t really speak about BT Sport or Amazon, as I haven’t really seen much of their games. I know some woman who nobody knew said something and because she got slated for it, she got a bit upset and then people jumped to her defence. But, there’s very few who haven’t subscribed to Bielsa Ball.

My point being, everything that Bielsa has done to this team in the last 2 years and 8 months is harking back to the old days. The Old Leeds, and not just on the pitch either.

The game he plays is his way.

Measured and dictated by facts and figures of the opposition. He researches every team (and makes no secret of it) , just like Revie did. The team plays as a team with no big personalities or individuals. Each man mucks in, the embodiment of Billy’s “side before self – everytime”. Each player battles to the very end of the game. They cover for each other so no gaps are left. Like Bamford’s clearance last night in front of goal, even though Meslier was behind him, he kept his keeper safe. It’s been said time and time again this season, we play as a team.

Yet Bielsa remains a humble man.

His quote this week “I am managing in the Premier League because of Leeds” or something like that. He is so respectful of the fans, because he recognises how important we are. He replies to his letters personally and continues to thank us for supporting our Club. He acts like he is doing it for us – the fans.

In a previous blog, years ago it seems, I made this very wish, the hope that we would finally get a manager and a team (and a club) who would give us, the long suffering fans, the respect that we deserve. After all win, lose or draw , we are the best fans in the world!

And this takes me to my point. We should look back in honour.

This week, Boris announced that we might get into the last game of the season. It sparked off massive debate about who gets to go into ER for the first time in a year – well, it’ll be more like 15 months by the time we physically get in. There were people saying it should just be a ballot, some saying it should be just loyal season ticket holders, some saying everyone should get a chance. The “newer” fans preferring the open ballot system of course.

If it was left to me, if I got given the chance to go in, I would have surrendered my ticket to Eric. Just like I have done previously, I will do it again. Because there are people who deserve to watch Leeds United more than me. The likes of Eric, who have followed Leeds all their lives. The Chairman, Charley Megginson, we may jest with, but you cannot deny his loyalty and his commitment. There’s others like Phil Beeton, both Little and Big Mick Hewitts, many devotees, who deserve to be in the queue way ahead of me.

I cannot see anyone agreeing with me, and this is will be a hotly debated topic of discussion, just like the away tickets discussion, which incidentally seems like a lifetime ago now. But if we have learnt anything from the last year, it is that life is short. The odds of going to one more game is considerably higher for a 30 year old than it is for a stalwart of the Revie era. This might be their last chance for those 65+ ones who actually saw Billy, Norman, Jack, Trevor and Terry play. Many might not want to go to the game for medical reasons etc. but I hope the Club will just give those long standing, loyal fans that one chance in the summer.

Similarly with the redevelopment of ER.

We all know we need a bigger stadium. The facilities are a bit rubbish in the Kop and West Stand, compared with the “Magnificent New” East Stand (younger readers look it up!). The extra investment from the 49ers has been secured and the plans that were drawn up a season or so ago for a “Citeh” style ground / training ground / sports and leisure complex may be getting nearer and nearer. The board has already said they don’t want a lifeless “identikit” stadium like the Riverside or Reebok or Stadium of Light (not the famous one in Benfica), but they would like something that reflects Leeds United.

I hope they do look back in honour and give the older fans, some input into what they would like in the new ER. After all, they were the ones who have such vivid memories of our famous history, Paris in 75, Salonika, the atmosphere in ER during the Revie Era. The ones who sat on the roof of The Peacock for that midweek Cup game in the 70s. Even the people like me who were there for those European nights in the glory days of the Champions League.

I’m not saying get a draughtsman into a room full of old codgers and go from there, but I am saying that iconic grounds grow from memories that are imprinted from a proud history. No one is ever going to say “oh remember those nights at under the famous floodlights at the JJB” are they? They’ll remember the stabbing risk outside shaky Ayresome Park, the odd hotch potch stands at the Baseball Ground or even the bogs at Oakwell,  before that. Those European games in the Champions League under the lights of the “Magnificent New” East Stand were kind of special. For me, Jimmy’s hat trick at Monaco – now that was a spectacular ground, even if I can’t remember very much about it.

I’ve heard noises about a walkway on the new roof and whilst it sounds great, it would be much more dramatic to do that at St James Park (the original one) overlooking Newcastle and the Tyne, than a view across Beeston, Holbeck and the M62. That’s my thoughts anyway. But who’s to know, the redevelopment of Matthew Murray might look spectacular. It would be even better if Leeds City Council would seriously consider putting a train station in / or linking up the old tracks so there’s a direct link between the new Leeds Bradford Airport and ER for all those Scandinavian and Irish fans. Now wouldn’t that be a good idea? Maybe a partnership agreement between Leeds Bradford Airport and Leeds United to get our international fans to games? Blue sky thinking? It’s worth an ask.

Fans input into the redevelopment would be great. A nod to the Spirit of Revie Era would be fantastic. We can only hope that the 49ers and the rest of the board will do as Bielsa does, and respect and value the old timers as much as these “newer” fans.

To finish with, Eric Ware, bus bingo caller extraordinaire – “Are you sweating at the back yet?” 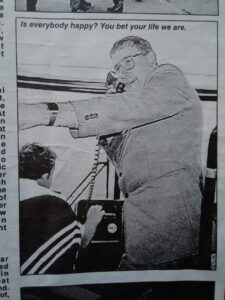 Are you sweating at the back yet?